After months of hard work and commitment and despite the difficult period we are living during which many enterprises, especially those working in the tourism sector, have been forced to stop, some of us are trying to make a wise use of time by widening the formative and informative tourism offer. Our main goal is to collaborate with all the major associations and museums operating in Italy in order to create a network of institutions which are solely dedicated to the Italian Campaign of the second world war as well as its historiographical research and cultural promotion: those are the grounds on which Italy War Tour is founded. The project’s common main aim is to promote all the memorial sites located in the italian regions which were involved in the second world war’s conflict with the purpose to extend the cultural side of the touristic offer as well as promoting and handing on universal values of peace, liberty and democracy to the next generations.
The first practical action of Italy War Tour is the creation and distribution of the illustrated War Tour’s guide map, a new editorial product promoted and released by nine museums which represent the main cultural centers of the historical memory regarding the events related to the Italian War Campaign of the years 1943/1945.
The guide map addresses the visitor to the discovery of the permanent exibithions displayed in the museums which narrate the hidden stories of the soldiers and civilians involved in the conflict, whereas the excursions in the surrounding areas of the museums allow an “in depth” experience of past events thanks to the passionate knowledge of the personal guides which are driven by a strong bond with the territory and its history. A wide section of the guide is dedicated to the places where main battles took place as well as to cemeteries and memorials where the souls of those who fought are currently resting. 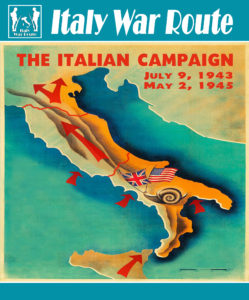