Born in 1911 in Guadistallo (Pisa), he studied literature at the University of Florence and then he became a critic of art and literature for many magazines. In 1937 he went to Germany under cover with the SIM (italian intelligence). In 1940 he started his activity as anti-fascist, and he first attempted to sabotage Nazis’ illegal Art purchases. During these years he met intellectuals/artists such as Giorgio Castelfranco, Antonio Berti and Giorgio De Chirico. He became a Nazi prisoner but then he escaped and, thanks to Giovanni Poggi he could go one with Partisan Intelligence and then in July 1944 he started collaborating with Monuments Men in Rome. After war he became active in many Art rescue projects approved by Italian and German Government. He died in 1983 without having accomplished his dream of a museum with all the recovered pieces of art.
His Diaries are very important to rebuild all his activity in Art Rescuing. By the end of the 60s he started a catalogue with the missing works of art. 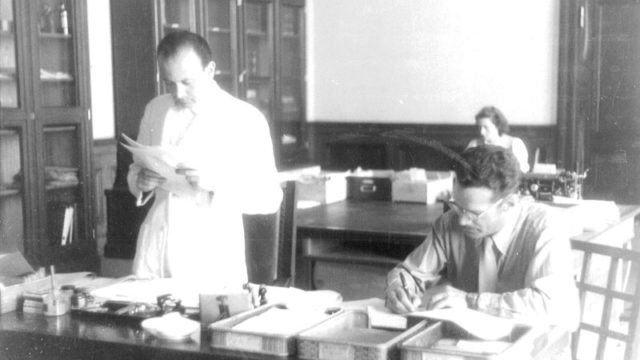 Rodolfo Siviero at the Munich Central Collecting Point in 1947