The events of the Second World War overwhelmed, with the whole country, all branches of the Railway Administration. After September 8th, the “Servizio Materiale e Trazione”, the Rolling stock department, of the Italian State Railways was forced to abandon its headquarters in Viale Regina Margherita (today Spartaco Lavagnini) and move to Porta al Prato and other makeshift premises. During 1944, part of the staff was “deported” to Verona, employed by the Transport Department of the Wehrmacht. With the adventurous return to Florence, part of the archive was lost. 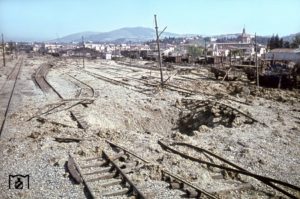 The marshalling yard of Campo di Marte in Florence with Monte Morello on the background – Agosto 1944. Photo by Walter Hollnagel

With the liberation of Florence in August 1944 and the arrival of the Allies, two important “centres” attracted attention: the”Servizio Materiale e Trazione”, the Rolling stock department, of the State Railways and the Military Geographical Institute.

All the design activities, the technical archive and the management of the maintenance of the rolling stock of the Ferrovie dello Stato depended on the “Servizio Materiale e Trazione”. The procurement and testing of spare parts depended on this direction.

With the advance of the Allies to the North, the operations of the Military Railway Service first headed for Rome (June 1944) and then moved to the Livorno-Pisa Firenze area.

In April 1945, 377 military goods trains circulated, moving 151,827 net tons from Livorno to Pisa. In the first five months of 1945, there were also considerable movements of troops, especially on departing trains, which in March carried a total record 88,683 passengers. All this, together with the movement of returnees and prisoners of war, led to an ever-increasing demand for railway equipment, which was satisfied only by drawing on all available sources in the United States, Sicily and North Africa and by establishing a vigorous repair and recovery programme for rolling stock available in Italy. On April 30, 1945 the U.S. contingent of the MRS in Italy consisted of 190 officers, 5 warrant officers and 3,685 enlisted men.

The units involved were the 774th Railway Grand Division, based in Rome; the 701st Railway Grand Division, based in Florence; two railway operating battalions, the 715th in Florence and the 719th in Livorno; the 753rd Railway Shop Battalion in Naples; the 760th Railway Diesel Shop Battalion in Rome; and six military police companies, stationed at various points from Naples to Grosseto, based in Rome. Almost as numerous as the American ones were the Railway Engineers’ units, for a total of 131 officers and 3,287 men. At the end of the hostilities, practically all the lines of the peninsula were managed by the State Railways.

The object you see represented in the photograph is a punch found in Florence, which shows the winged wheel, symbol of the railways, and the two letters “US”, probably used for the punching of testing and acceptance of spare parts. 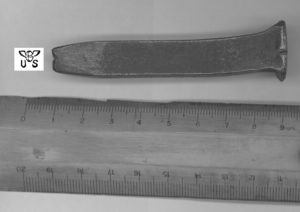 The punch found in Florence, which bears the winged wheel, symbol of the railways, and the two letters “US” 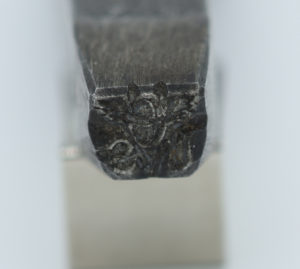 Detail of the punch

Detail of the acceptance punching of the spare parts

The presence of the “Servizio Materiale e Trazione”, the Rolling stock department, in Florence is part of the history of our country’s railways and goes hand in hand with the unification of Italy.

Since those distant years, Florence has never ceased to represent not only one of the most important railway junctions in the country, but also an important business centre and a pole of commercial and industrial activities linked to the railways.

In 1883 the railway lines that headed it were all run by the State, but they were divided between the Administrations of the High Italy Railway Roads and the Roman Railway Roads; the latter had the General Direction in the Cerretani Palace in Piazza dell’Unità Italiana, and other offices in the buildings annexed to the station of S. Maria Novella and in the Palace of the Customs of Porta al Prato, which was none other than the ancient station of the Leopolda adapted as the seat of the Italian National Exhibition of 1861.

The Società Italiana per le Strade Ferrate Merrate Meridionali, the Bastogi, also had its General Management in Florence, precisely in the Alamanni Palace in via dei Renaj 17 (now 23), although the lines operated by it included Bologna, Ancona, Naples and Bari.

The railway reorganization of 1 July 1885 gave a strong impulse to the activities of the Southern Italy, which took over the Adriatic Network, corresponding to about half of the railways of mainland Italy. The Company then purchased the Scala-Della Gherardesca building in via Pinti 93 (today Borgo Pinti 97-99) for the headquarters of the General Management, leaving the Alamanni building, while the Mobile Material Service was installed in Piazza dell’Unità.

On 1 July 1905 the entire Italian railway network, which since 1885 had been divided into the three Adriatic, Mediterranean and Sicilian Networks, passed under State control, giving rise to the Ferrovie dello Stato. Only the Strade Ferrate Merrate Meridionali continued to manage 2282 km of lines separately until 30 June 1906.

The first order was necessarily provisional, both because of the very short time elapsed between the approval of the law and the day when the new company had to start operating, and because the Strade Ferrate Meridionali maintained for one year the operation of 2282 km of lines. The General Management with all the Central Services naturally established itself in Rome, but the “Servizio Materiale e Trazione”, for a better use of the personnel, kept in Florence the Studies and Testing branch that descended directly from the Material Management of the Adriatic Network, and other offices in Turin and Milan.

The final order of the State railway operation was approved in 1907 and included, among other things, to join in Florence, in a building specially purchased in 1906, of all the offices of the 10th Central Service (Traction and Material): The Traction branch was transferred from Rome on 1 November 1909, the Electric Traction Division from Milan a few months later; with this and with the transfer from Bologna to Rome of the Maintenance Service, then separate from the Works Service, the absorption of the former Southern personnel was completed and the various temporary offices located in Milan and Turin were abolished; Florence remained the only branch of the General Management.

The Ferrovie dello Stato used Palazzo Cerretani as the headquarters of the Departmental Directorate. The Office for Studies and Testing of the 10th Service (Traction and Material), which remained in Florence in order “not to disturb the action of elements from which a strong production of work had to be immediately demanded”, was set up in Porta al Prato; but already in April 1906 an entire block, partly built, was purchased in Viale Regina Margherita (today Spartaco Lavagnini) where in 1908, after the incorporation of the remaining Southern lines, the various offices of the 10th Service, which had previously remained in Rome, Turin and Milan, were reunited. The Studies and Testing branch remained at Porta al Prato until 1950, when the building in Viale Lavagnini was completed on the side facing Via Lorenzo il Magnifico. 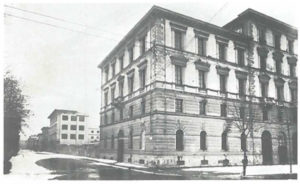 The building of the Rolling stock department seen from the Fortezza da Basso with the side facing Via Lorenzo il Magnifico, before the extension in 1950